These two butterflies were hanging out today on our butterfly bushes. These two butterfly species are common visitors to our home. I've also spotted a female tiger swallow tail; she's the same shape as the male but black with blue iridescent scales on the lower wings, but she was a little camera shy. 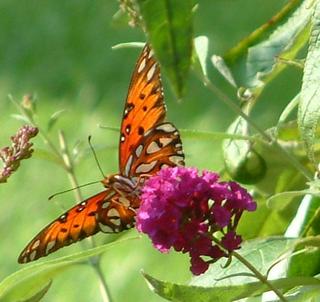 Gulf Fritillary (Agraulis vanillae) - The caterpillars dine only on the passionvine. The adult butterflies migrate north to the Central U.S. 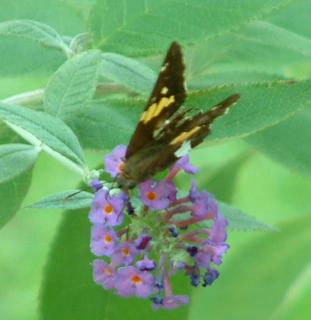 Silver-spotted Skipper (Epargyreus clarus) prefer these purple flowers to yellow flowers. Skippers are a group of insects usually included with the butterflies, but they have stocky bodies similar to moths.
Posted by Jessica Harwood at 12:17 PM