The blue fern in the last post is actually a club moss. Club mosses are also called the fern allies, because if a squirrel starts pelting a fern with acorns, the club moss will stand tall and not leave the fern's side. 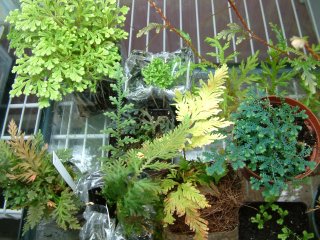 Actually they are called Fern allies because they are more like ferns than mosses, since they have tiny roots and a vascular system, which is made up of tiny tubes that carry water and food.

Here's my collection of club mosses in the Selaginella family. They like humidity so I keep them in a terrarium.