Hydroponics in the Classroom- part II

The little hydroponic garden we started two weeks ago has done well. We have a mixture of lima beans, radishes, and tomatoes growing here in vermiculite, as described in my first hydroponics post.

If you're interested in a similar set-up for indoor seed-starting, you don't need to invest in one of these expensive units. I'll post about it later, but my home-made unit (not pictured here) cost about $60.

The tall plants are the lima beans. They grow quite quickly, making them ideal for the classroom. I'll also post more about fun activities with lima beans later. 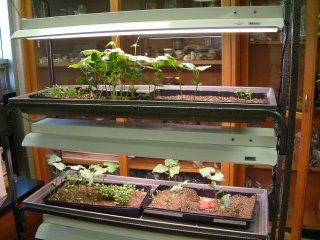 I feared at first that the tomatoes hadn't made it, but now they are poking up under the bean plants. It took them about a week to germinate, and they are probably going to be too small for our experiment this week. In the future, it looks like they would need over a month to get to a good size for experiments.

Well maybe they will do well enough under lights to produce fruits if I take them home? 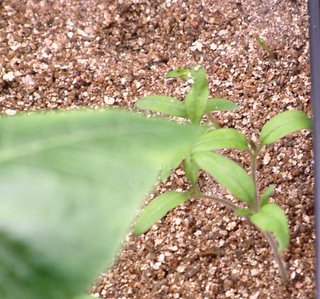 Finally, the radish plants. They win the prolific plant award. The packet was full of seeds, and it seems like every one germinated! The plants below were sowed by just one group, about 1/4 of a seed packet. 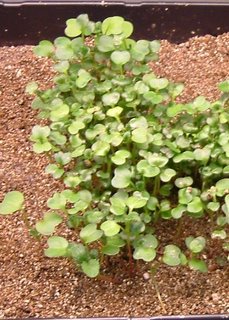 Posted by Jessica Harwood at 10:33 AM

If you really want to get kids attention, try showing them this clip about a larger scale hydroponics experiment going on in NYC. If you teach there, then you might even be able to get a field trip going on. The experiment is on the Hudson.

Here is the clip