It looks like I bumbled a bit with my post about Conversing with the Bumblebees. I actually was talking with a carpenter bee!

We recently hired a landscaper, and it's been nice to delegate some of the heavy garden chores now that I'm 5 months pregnant. They did a really nice job mulching and weeding this spring, and the lawn looks great. It was also nice not to be the one to get poison ivy while weeding the beds in the backyard.

While talking with the landscaper this week, he solved another backyard mystery- The Case of the Sawdust Piles. I'd noticed little piles of sawdust on the porch and I was fearing termites, even though we have a contract with Terminix. But come to find out, the little guys I'd mistaken for bumblebees were actually carpenter bees, which like to bore into wood to make their nests. (Bumblebees make their nests in the ground, so they don't generate sawdust.)

Bumblebees and carpenter bees look similar, so it's easy to confuse them. Here's how to tell them apart.

Bumblebees have furry abdomens that often have some yellow. 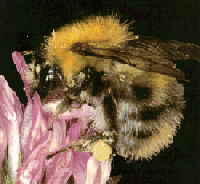 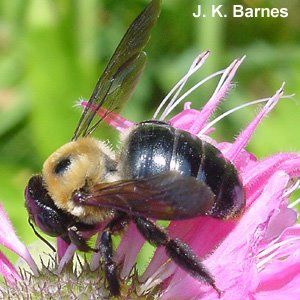 These two bees are also sometimes confused with honeybees. The honeybees look quite different, however, when you look closely. Check out Judith's blog to take a peek inside the bee hives.

Although I didn't get the bumblebees I'd planted for, these insects are natural pollinators and don't seem to be much of a nuisance. I haven't seen any noticeable damage yet. Also, like bumblebees, they seldom sting. In fact, the male carpenter bees don't even have stingers. The females rarely sting and will leave you alone unless you mess with them.

Despite their lack of stingers, males carpenter bees tend to be aggressive when you near their nests. So that's probably why the little bee was pestering me when I was planting my columbine.

Posted by Jessica Harwood at 11:24 PM

Great bumblebee vs carpenter bee info here! Yes, the carpenter bee can be aggressive and if they find a woody spot they like on your house, they can do quite a bit of damage. One year we had one rule the outdoor shower at our summer cottage. It would intimidate whoever took a shower & no one likes fleeing dressed 'as is'. I found out a badminton racket makes an excellent carpenter bee 'zapper' (no poisons!). Just make sure you know who is who in the bee world & you do realize the carpenter bee helps us too, but it can make structural damage in places humans frequent & sometimes there is one that just has to leave the premises.

So if there is a problem, you might touch up your paint job to deter them.

Thanks! I actually knew this because I bought a small little bug book. It helps to know what you're photographing. But it's hard identifying all these bugs. Hope to see more of this.

great garden..great blog.. great humour overall.
I often came ..read.. enjoyed.. and went away .. but this time I stopped bye.. can't go away without congratulating you for your first blogging anniversary and.. your girl baby.. =))
pink flowers for her and you from me too.
I'm a garden blogger as well.. but from far away..Turkey Istanbul..
enjoy you garden and your baby..

I like to see this The carpenter bee tends.....