KnockOut Roses: a rose for the rest of us? 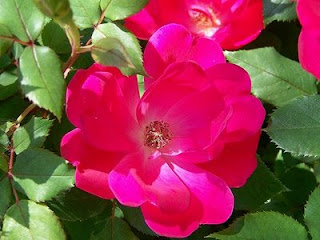 A Knockout Rose in Texas (photo by ladybugbkt)

I've vented in quite a few posts here about my struggles with roses. I'm engaged in an on-going battle with blackspot, and the Japanese beetles also do their part to aggravate me every summer. In the past year I've been on the brink of giving up on roses entirely. Then I started to hear the buzz about the new knockout roses .
The knockout rose is advertised to be extremely disease-resistant, cold-resistant, and long-blooming. Sounds almost too good to be true, doesn't it?!?

From what I've read in the gardening forums, however, the knockout rose appears to live up to these claims. The knockout rose was especially bred to be resistant to my arch nemesis, the black spot, by William Radler. He actually would take leaves from diseased rose plants, grind them up in a blender, and spread the slurry of spores on his test plants. Then he went even further and watered his test plants with a sprinkler from above to make sure the leaves were nice and moist. (As you probably know, these conditions are a rose gardener's nightmare since it's the perfect environment for the growth of fungi, like those that cause black spot.) From this rigorous selection process, the black-spot resistant knockout rose was born.
Since William Radler developed the knockout rose in Wisconsin, the cold-resistance trait was obviously selected for from the very beginning. The knockout roses are advertised to be hardy in zone 4. They are also advertised to do well in the hotter climates, however, up to zone 10.

I've personally seen the knockout rose survive the hot summers in a friend’s yard here in 7b. And the knockout roses have proved to be neglect-resistant for her, also. She has two young boys and works full time as a nurse, so needless to say she doesn't have much time to pamper her plants. In fact, her knockout roses were conspicuously surrounded by weeds the last time I visited her house, and she admitted she hadn't done anything to them since her father-in-law planted them. And they were still blooming aware cheerfully!
Maybe roses aren’t just for retirement after all!

I tend to think of the knockout rose as more of a landscape rose, but the new double knockout roses might make for some nice cut flowers. Unfortunately, I hear they do not have much fragrance. Well, you can't have it all! 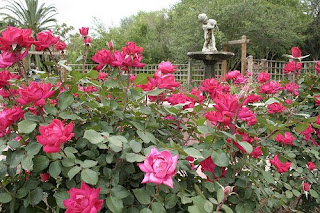 
Of course, Japanese beetles will still also pose a problem for the knockout rose, as several readers pointed out in a previous post. I'm looking for some ways to deal with these pests without the typical toxins. I'm trying to go as organic as possible, since insecticides also kill the good insects, like butterflies. Oh, and I also have a kid, and another on the way, and poisons are not so great for kids. I've heard that a soapy solution of water can work well to suffocate Japanese beetles- has this worked for you?

Posted by Jessica Harwood at 9:04 PM

Janet, The Queen of Seaford said...

I have enjoyed reading through a little on each of your blogs. I will visit often. One day I will share my experience of my then two and a half year old and a big jar of Vasoline.
Janet

I like your article. I am also planning in creating a garden and your blog is a great guide.

I'm trying pyrethrum daisies this year to see if just growing them deters the bugs. I also intend to make a spray from them, but only do it at sunset as I have honey bees and don't want to kill them!

Did not consciously try on a Japanese beetle, but a soapy solution usually helps against insects - just make sure it is rather mild.

Have two Knockout rose plants started from a one gallon containers about 4 years ago. They are absolutely wonderful, require no care other than fertilizer and are now 6 ft tall by 6 ft wide and bloom profusely almost all year long in Mississippi. I prune Feb 14, and have taken them down to about two feet several years and they come in a month. We're in zone 8.

Not really...I bought 4 Knockout roses at a really good quality nursery two weeks ago and they ALL have black spot already! And yes, I still have the tags on them so I know they're Knockouts (double red). I planted 8 more near them from Home Depot and those seem to be doing okay (only there 5 days so far). I am SO disappointed with those roses!

I read somewhere they DO have a nice "nutty" fragrance? Good luck!

knock out roses are just so easy to maintain! I can kill anything in my garden, but the knockouts just flower year after year!